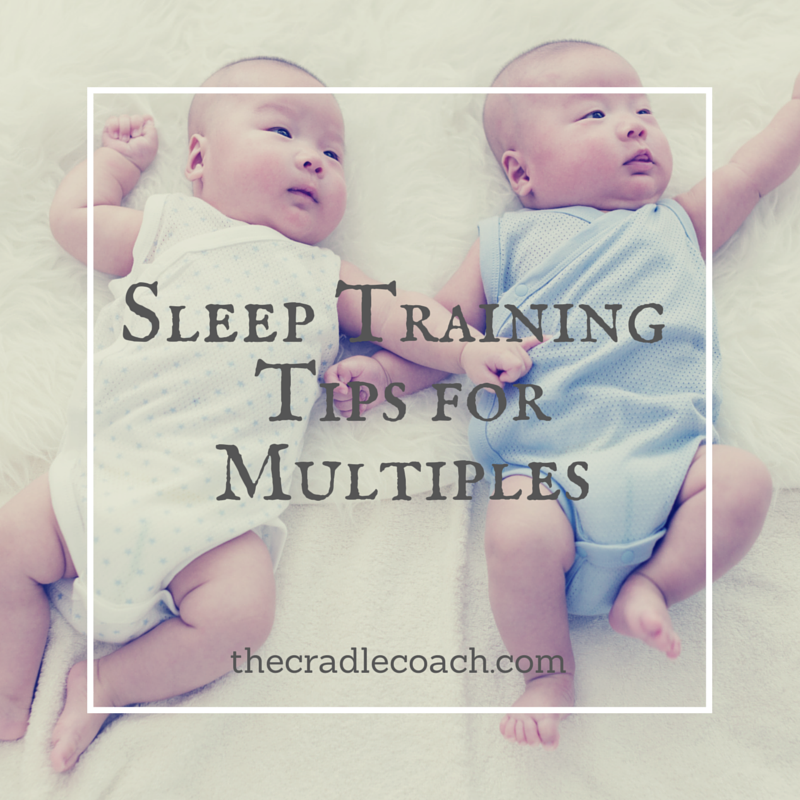 I find that parents of multiples are some of the most special people out there. How they do it is beyond me. I struggled with having three children all at different ages, how on earth have they been doing it with TWO or MORE since the beginning!!! It’s fascinating. The whole concept of multiples is just mind blowing. The bond that is formed from the womb until adulthood is extremely special. Anyways, getting side tract…how can parents of multiples start giving their babies the best quality sleep from the beginning. We broke it down with 7 easy sleep tips!

1. Sync their schedule. It’s so important when you have multiples to get them on the same schedule. Start off by waking them up each morning at the exact same time. Continue the day with a little routine (nothing forced when they are younger than 12 weeks old with their adjusted age). Finish the day with a good bedtime routine, placing them down at the same time each night.

2. Feed every three hours. Once your babies aren’t feeding on demand (after the first few weeks of life) you can begin stretching their feedings to every three hours, feeding them at the exact same time! This is important as you begin structuring out their entire day and allowing them to sleep in longer stretches at night. Remember, we like to see babies taking in atleast 4oz per feeding to begin an sort of sleep training or stretching.

3. Bedtime routine is a must. Hands down, this is one of the most important things to do to give your babies the best opportunity for a good nights rest. Why? So they learn by routine what is expected of them. Their bodies will begin to follow the wind down period and become tired at this time, ready to take on the long sleep ahead. With multiples, plan for atleast an hour (sometimes closer to 1.5 hours) for your bedtime routine. So if your goal is to get them down in their beds by 7pm, so that routine at 6pm. Simple routines such as a bath, massage, pjs, books, bottle and then BED!!!

4. Have them sleep together. With multiples, they are use to sharing tight quarters with one another. Think about it, nine months in that belly of yours! So keep them together. Place them in the same room so they become accustomed to hearing each others sounds while they are in their cribs. The American Academy of Pediatrics recommends to NOT crib share, so instead of place them in their own cribs but close to one another. They don’t have to be spaced out on either side of the room.

5. Get that sound machine going. Your babies will become use to the sounds they are making with one another, however lets give them the best possible sleep by drowning out any extra noises throughout the house. Keep the sound machine at a good level, nothing louder then a cry but nothing quieter then a faint sound. Something right in the middle. Make this part of the bedtime routine by turning it on, then turning off the lights and placing the babies in their cribs when it’s time for bed.

6. Gentle sleep training. When the time is right, find a very gentle method that you feel comfortable using, that doesn’t go against your parenting philosophies. Every child is different and every method is unique to a child. One child might even be a better sleeper then the other. That’s ok. No matter what the situation is, you will want to use a simple method that involves you to a certain point.

7. Do it all again the next day. Be consistent. Once you are on a routine, you are going to enjoy the benefits of knowing what is going on in their day, what time is available for you to plan activities, and time for you at the end of the night!

Breaking Free of the Short Nap